Whether you are installing oil spill containment boom or turbidity curtains, these products are only one of the items you will need for a successful deployment.  Factors such as wind, tide levels, currents, boat traffic, and safety issues are all considerations when developing your plan. Texas Boom Company offers a wide range of accessories that can make your installation easier, safer, and more effective.  Anchors, lines, buoys, lights, beach stakes, and tow bridles can all be important additions to a successful installation. 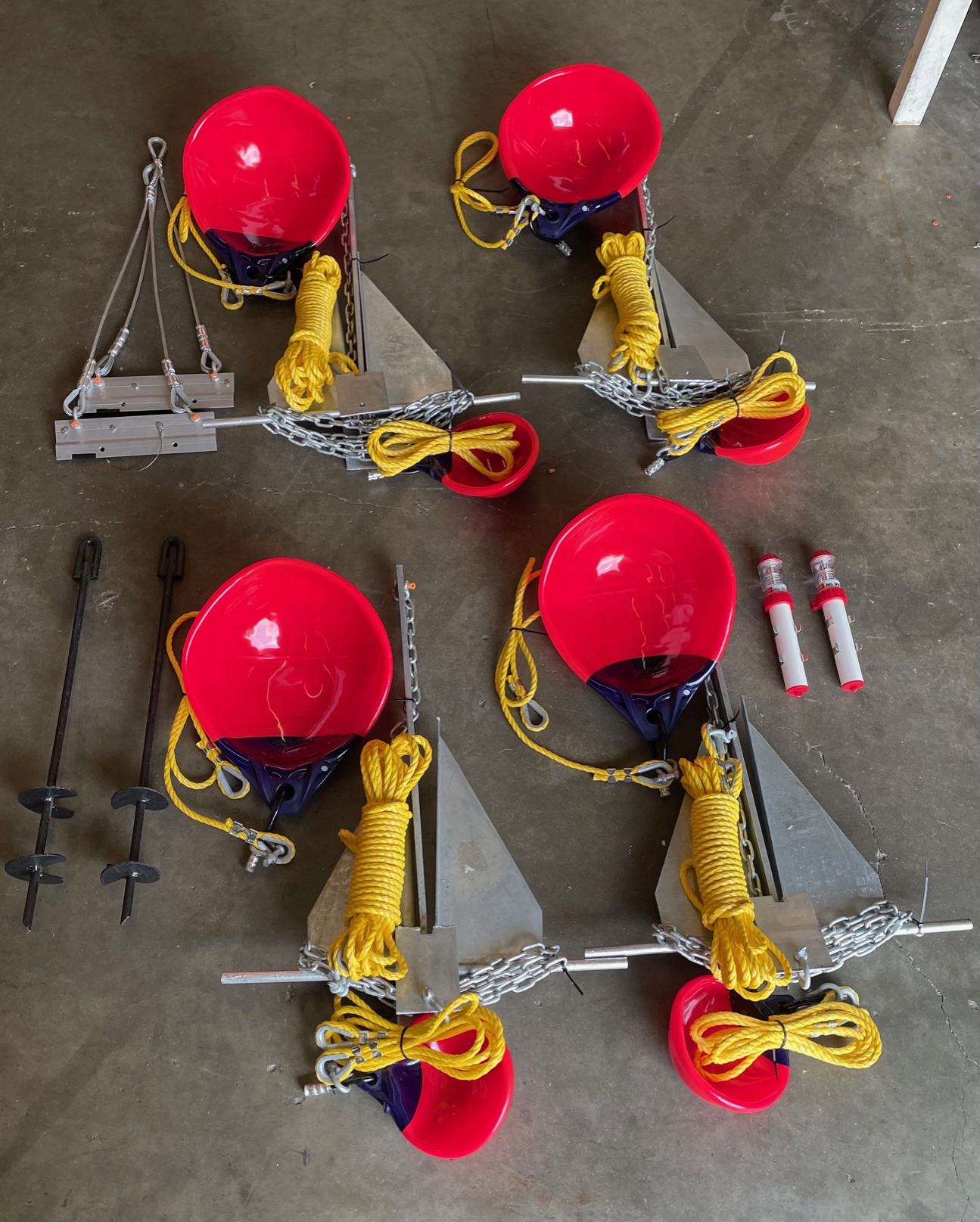 The layout of the containment boom or turbidity curtains will determine the overall length of the barrier required.  These boom or curtain systems are made in modular form with universal end connectors that allow the sections to be connected for additional length.  Section lengths are typically 50 feet or 100 feet.  TBC can accommodate custom lengths as well.  For turbidity curtains or silt curtains, the depth of the skirt is also a consideration.  Typically, the skirt of the silt curtain should not be in contact with the bottom, as sand, mud, and sediment can build up on the curtain and eventually drag the flotation under.  Having the skirt dragging on the bottom can also create additional silt, which defeats the purpose of these containment products.  A one-foot gap between the bottom of the body of water and the bottom of the skirt is recommended. 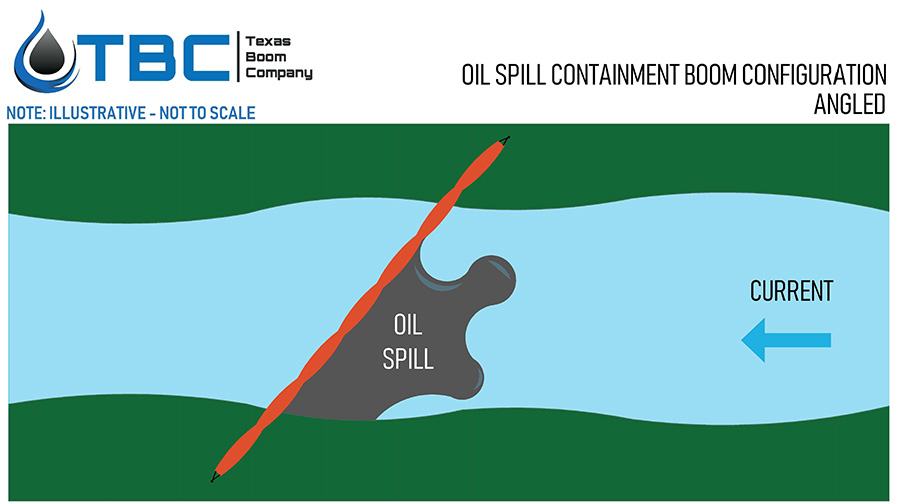 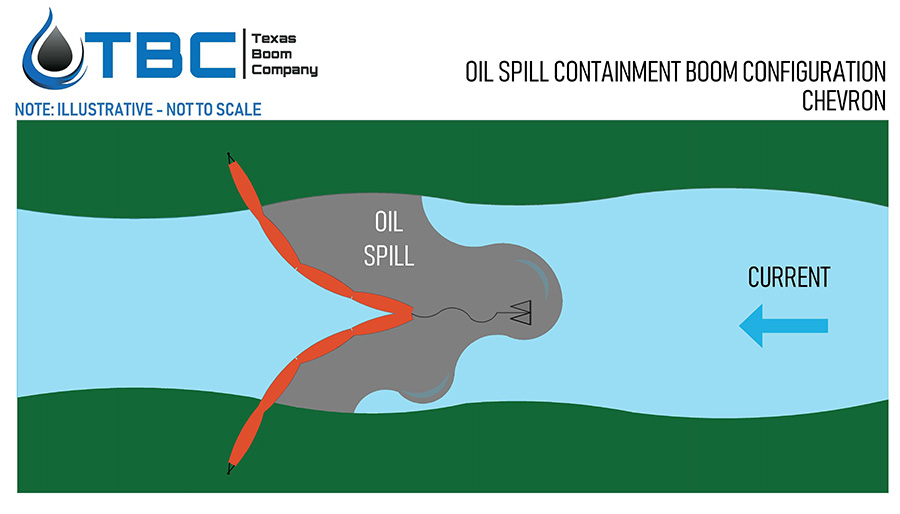 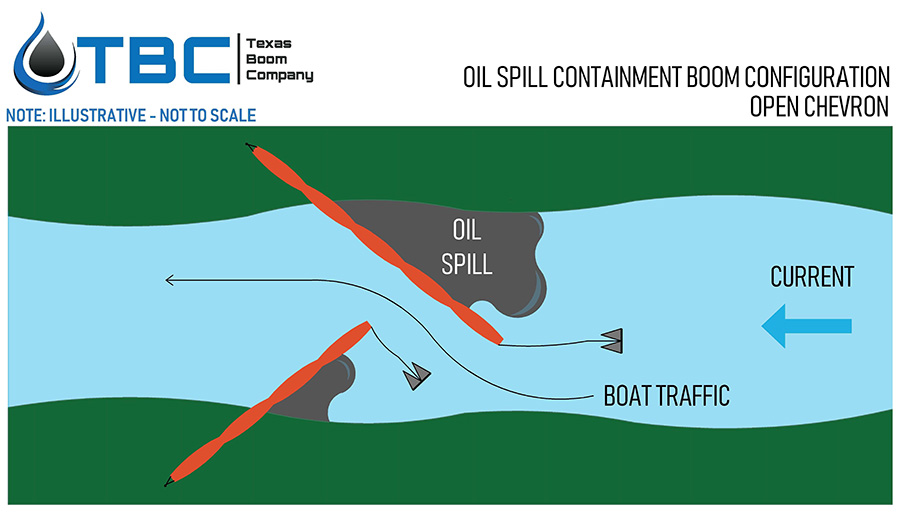 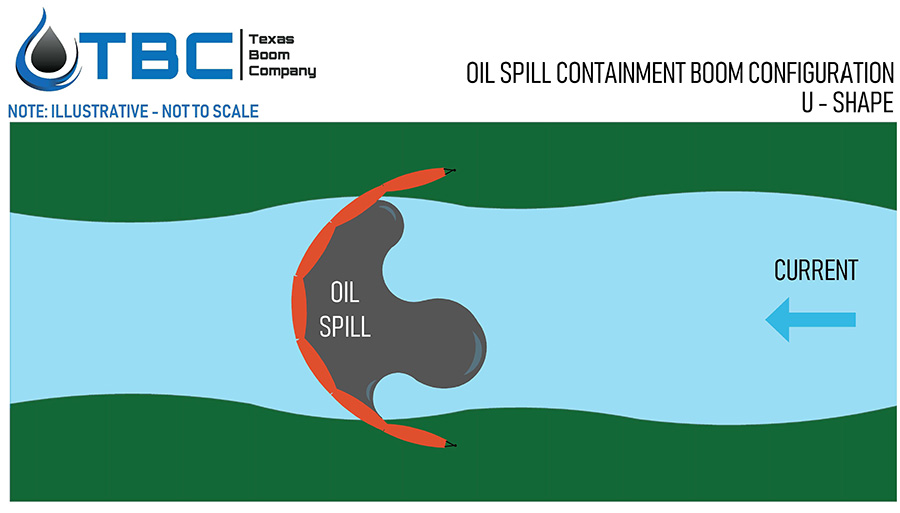 Once the layout if finalized, an anchor plan should also be developed.  If tides are expected to change direction, dual anchor setups holding the boom or silt curtains in either direction may be required.  Depending on the bottom surface, different types of anchors may prove to be more effective.  Adding anchor line buoys and trip lines with additional buoys can help in adjusting or retrieving the anchor systems.  Sometimes, anchors can be doubled up to improve the holding power of the installation of tides or currents that are particularly strong.  Anchor setups should be monitored regularly to allow for timely adjustment as conditions may change or anchors lose their hold on the bottom.  Danforth anchors are the most common type of anchor used for these types of deployments, but heavier pyramid anchors are also used when conditions dictate.  Plow-style anchors are also sometimes used for boom and silt curtains.  Pilings, piers, trees, or beach stakes also offer viable anchor points when a deployment is executed near shore. 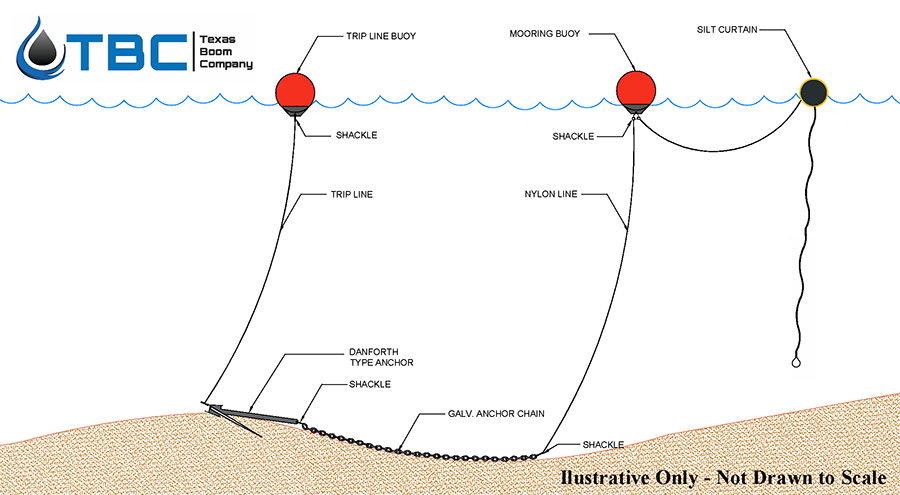 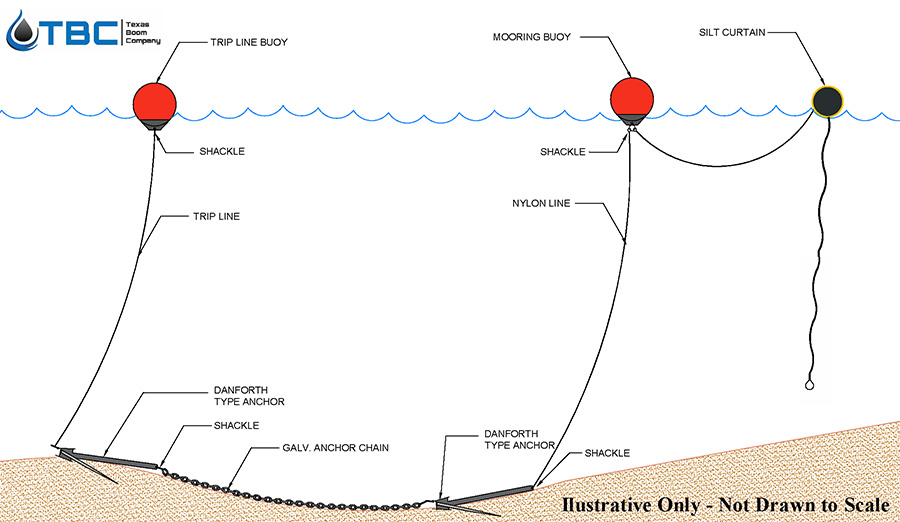 Deploying the Boom or Silt Curtain:

If the containment boom or turbidity curtain is being deployed from a boat, it should be arranged on the boat in an accordion pattern and carefully fed over the side when in an approximate location.  Again, and furling lines or ties should be left in place on a turbidity curtain to make the skirt more easily handled during positioning.  Sections can be connected end to end on the boat before deployment.  It is recommended to anchor the initial end of the boom or turbidity curtain to allow the boat to slowly move away and pull the length of the product off the boat and into position in the water.   Boom reels are sometimes used on boats to make the deployment spill containment boom easier as the boom can be unspooled instead of dragged.

It may be more efficient to initially place your anchors with lines and buoys in position before the boom or turbidity curtain is placed in the water.  The position of these anchors can be adjusted as needed, and trip lines with buoys on the anchors can make the adjustment process much easier.

Anchors – There is a wide range of anchor styles available.  However, most containment boom and turbidity curtain installations use one of two types of anchors:

1 – Danforth Anchor (flute style) – these anchors perform best in sand or mud, but are versatile enough to hold well on rocky, grassy, clay or weed bottoms as well.  The Danforth anchor holds best when an anchor chain is used between the anchor and the anchor line.   The weight of the chain helps to reduce the angle of the stock of the anchor relative to the bottom during normal use and thus helps to keep the flukes engaged with the terrain below. 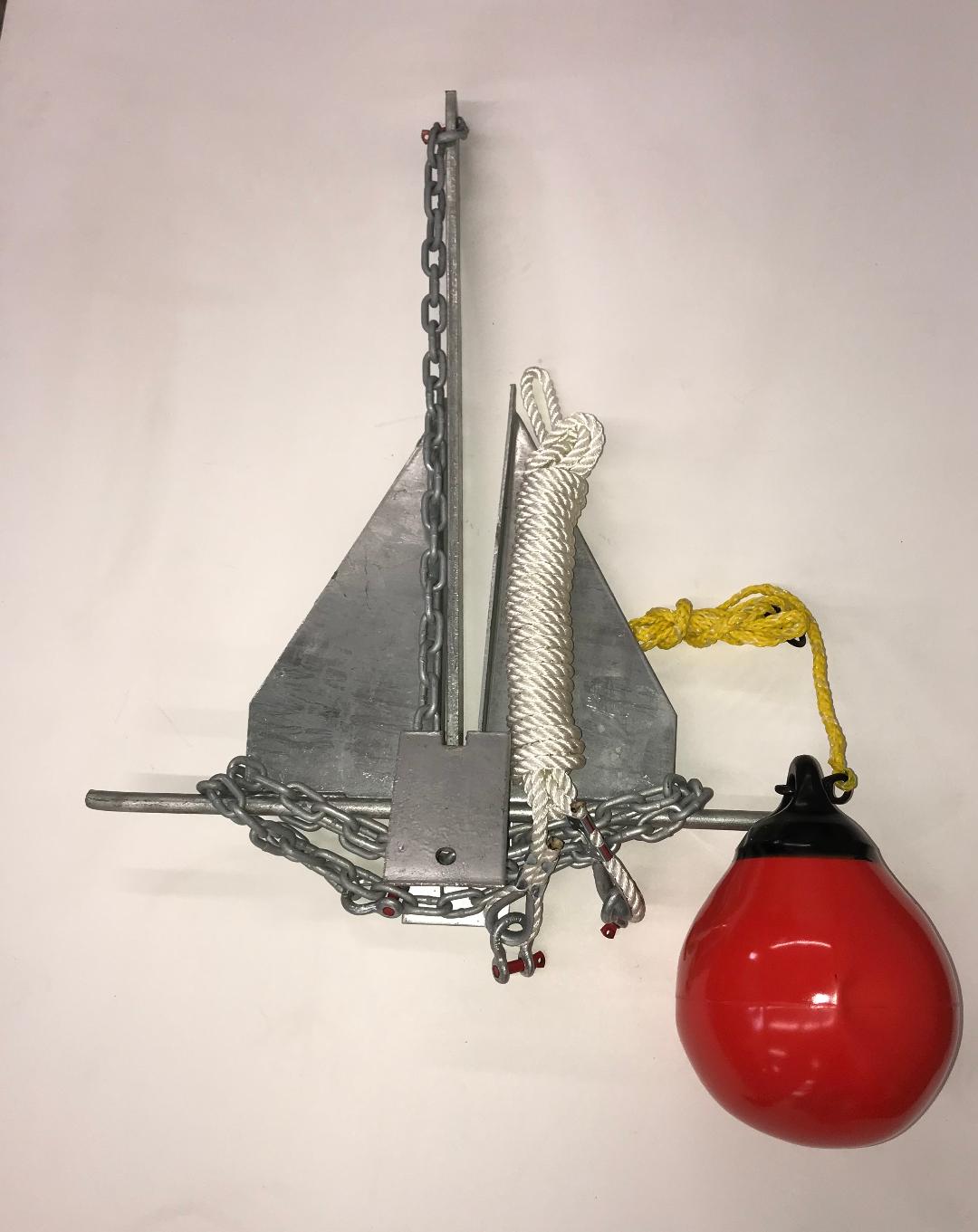 2 – Pyramid Mooring Anchor – the Dor-Mor Pyramid Mooring Anchors rely more on a combination of weight and shape to help moor a containment boom or turbidity curtain.  The inverted pyramid shape tends to serve as a wedge when dropped, partially or fully burying itself if the material on the bed allows.  Once covered, the holding power of the Pyramid Mooring Anchor is increased significantly.  Because these Pyramid Anchors can weigh anywhere from fifteen to four thousand pounds, the weight helps maintain position and the surface area of the top of the anchor helps allow it to become buried. 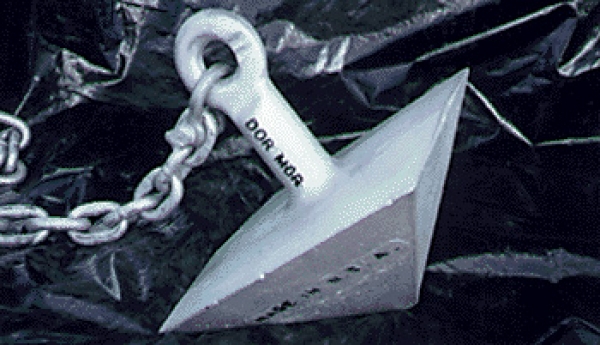 Anchor Lines – Durable, high-strength ropes are typically used to attach containment boom or turbidity curtains.  100% monofilament polypropylene rope offers a great combination of strength, stretch, and resistance to rot, mildew, grease, oil, and most chemicals.  There are times when stainless steel or galvanized steel cable may be appropriate to serve as the connection between a boom or turbidity curtain and pilings or other above water anchor points.   The length of the anchor lines should be long enough to provide adequate scope.  Scope is calculated as the ratio of the length of the anchor line to the depth of the water and is ideally at least three, meaning the anchor line should be at least three times the maximum water depth where the containment boom or turbidity curtains is installed. 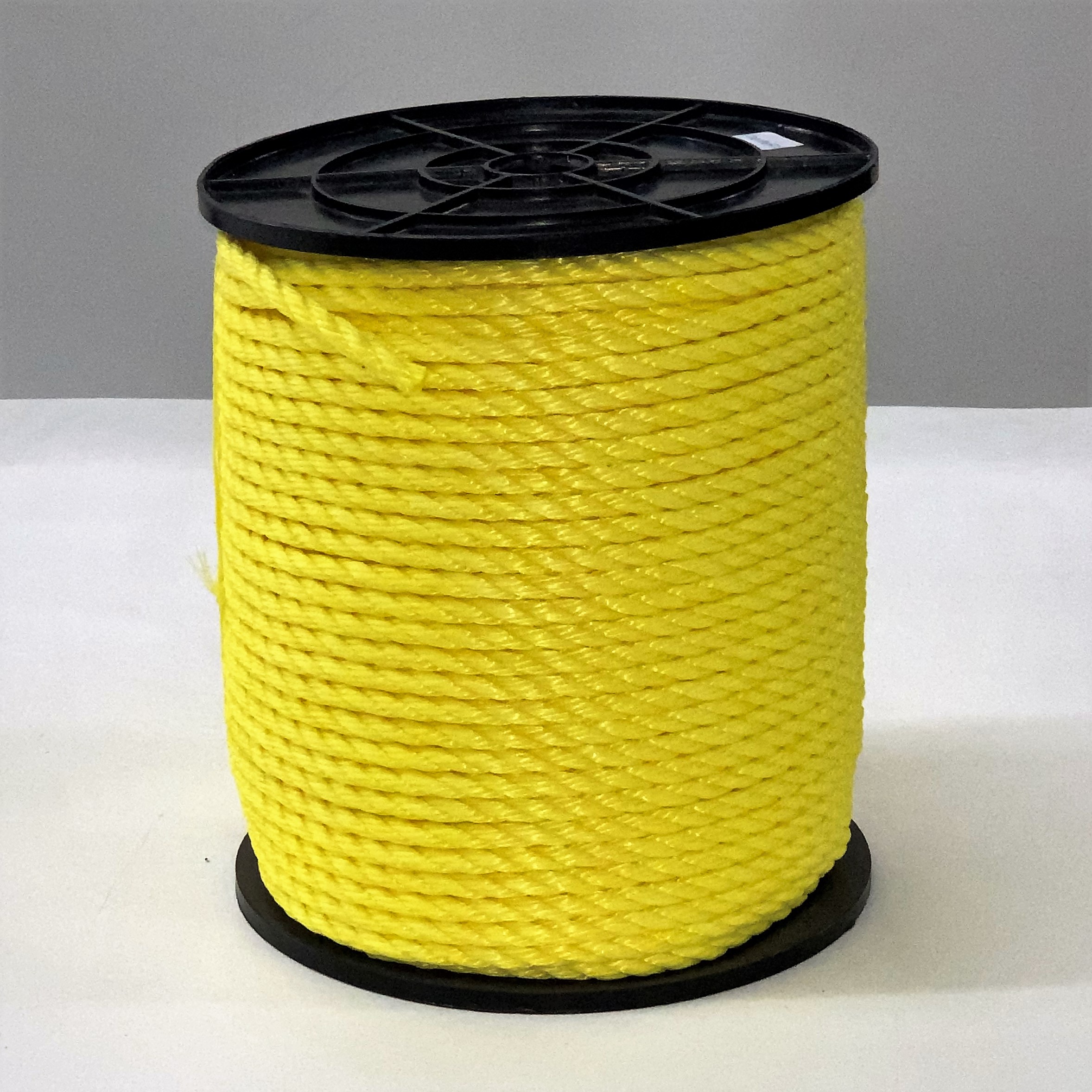 Buoys – The most common buoy types used with containment boom and turbidity curtains are round inflatable marine-grade vinyl buoys.  These are typically shipped deflated and are easily inflated with a hand pump or powered air pump.  In a normal deployment, a larger inflatable buoy is attached to the end of the anchor line opposite the anchor.  A smaller round buoy can be attached to a trip line above the anchor.  This line is connected to the bottom end of a Danforth Anchor and allows the trip line to pull in the opposite direction of the anchor line, often making it easier to dislodge the flukes of the anchor from the seabed, riverbed, or lakebed.  By making these two buoys different sizes, it is easy to visually indicate which is the anchor line and which is the trip line. 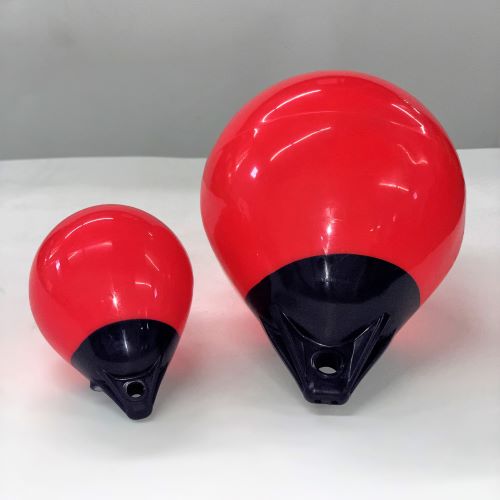 Beach Stakes – Beach Stakes are used on land to provide a secure anchor point.  There are two primary beach stake styles.  One is a longer studded steel stake that is driven into the ground.  A stud plate is included with each stake and the studs provide added grip to make tying off easier.  The second type of beach stake used is auger-style stakes.  As their name indicates, they are shaped like an auger or screw and are twisted into the ground.  Because the auger blades are positioned perpendicular to the ground, the auger blades provide added holding strength once buried.  Galvanized steel beach stakes will last longer in salt environments that always shorten the life of steel products. 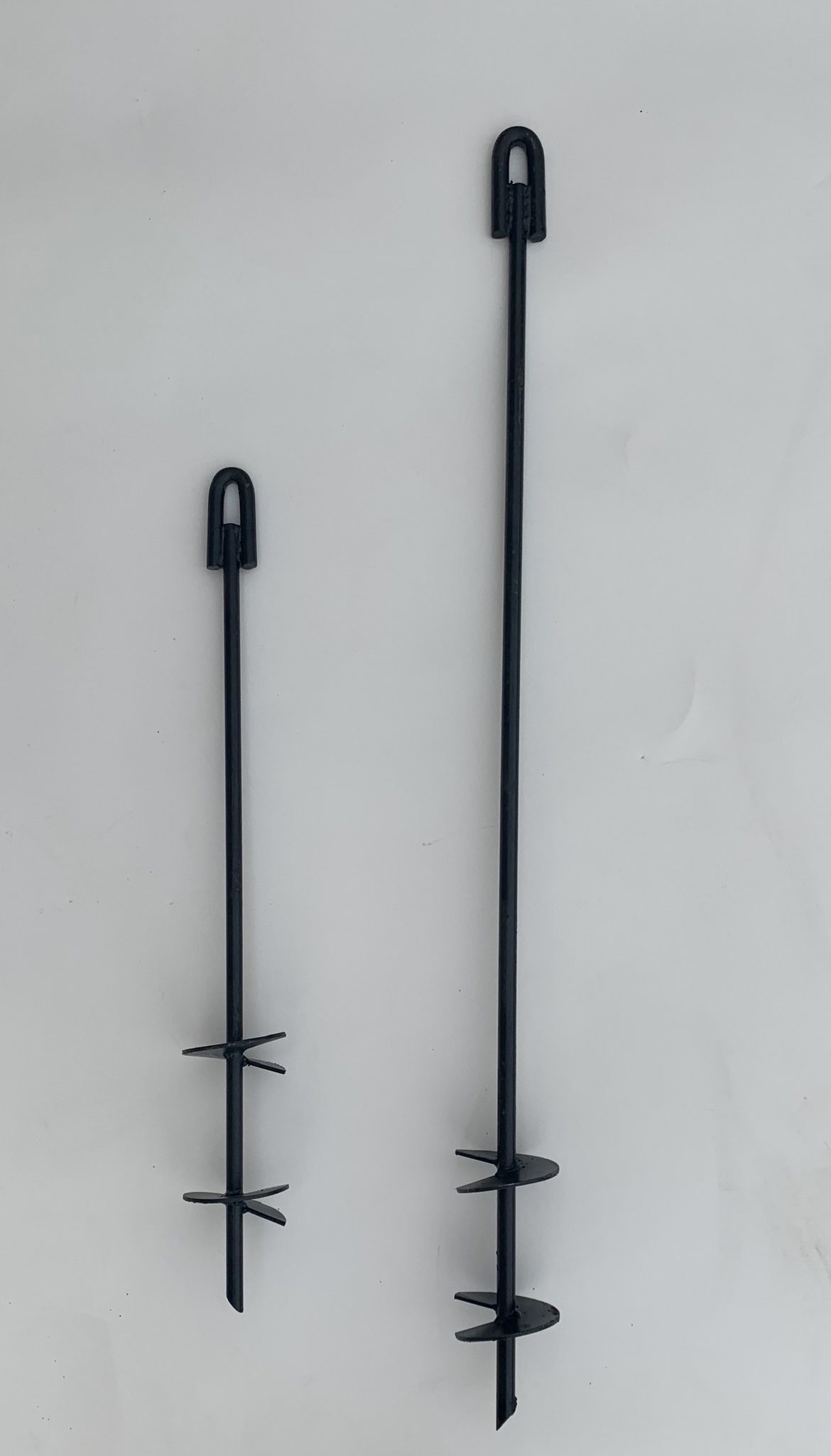 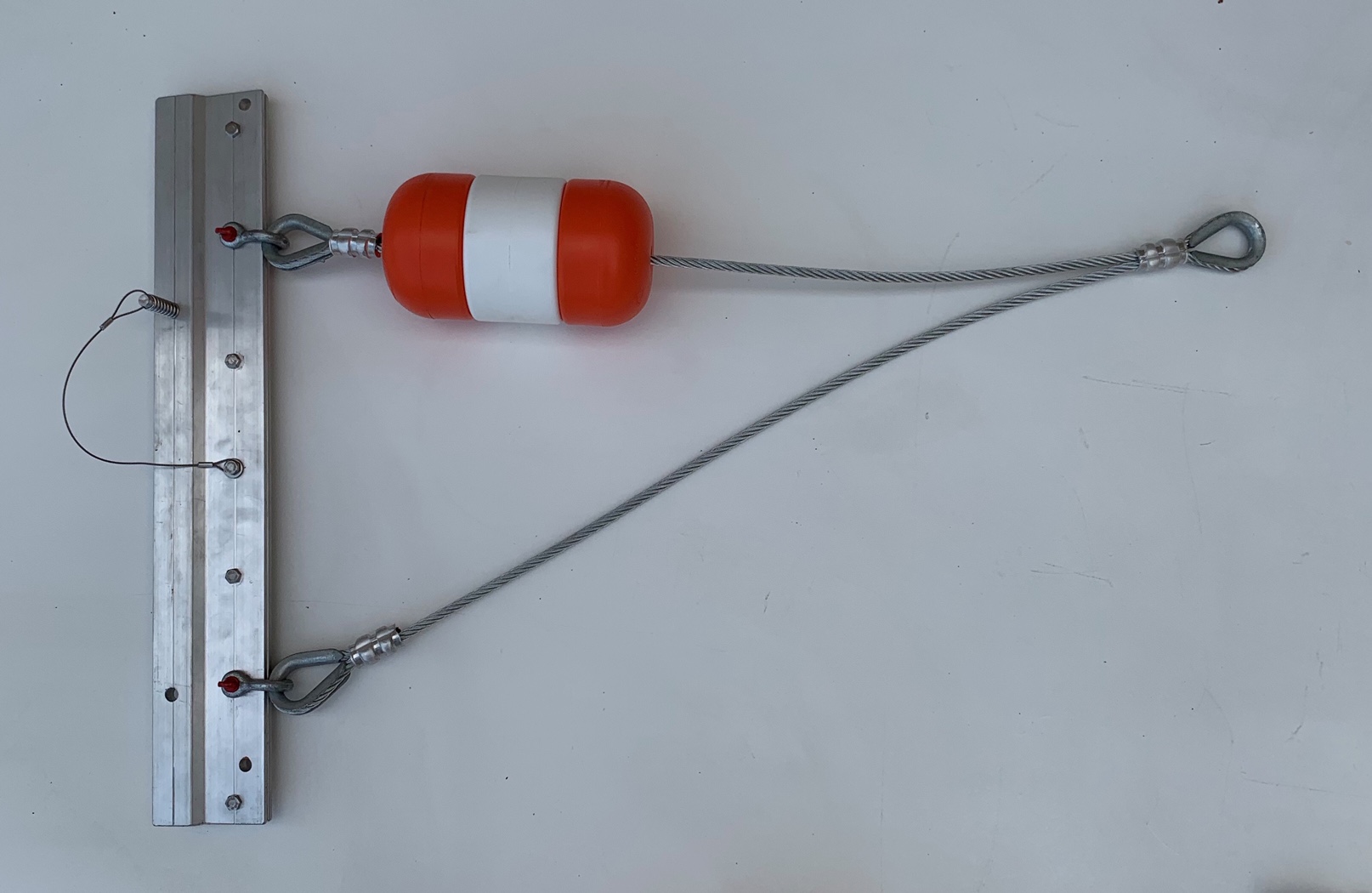 Buoy Marker and Lights – When containment boom and turbidity curtains are deployed in areas with boat traffic, they can create a hazard to boaters, particularly at night.  Battery-operated Buoy Lights can help reduce the risk of boating accidents by offering a warning to nearby boat traffic.  Beyond the risk of injury that could occur if a boar or water vehicle were to hit a section of containment boom or turbidity curtain, there is also potential damage to the product itself.  These Buoy lights can also make it easier to monitor the position of boom or turbidity curtains from afar or ashore at night.  These relatively inexpensive beacons can be mounted on brackets that can be hard-mounted to the aluminum end connectors or can be tethered to the boom or turbidity curtain while being suspended above the water with a float collar.  The lights are manufactured to either remain solidly lit with a steady burn or flash at a time interval of 30 times per minute, depending on the model.  These buoy marker lights are offered with white, red, green, or amber lenses.   The marker lights offered by Texas Boom Company comply with USCG Rule 88.15 for dredge and pipeline applications, USCG Rule 24 for towing or pushing, and USCG Rule 22 for visibility of lights. 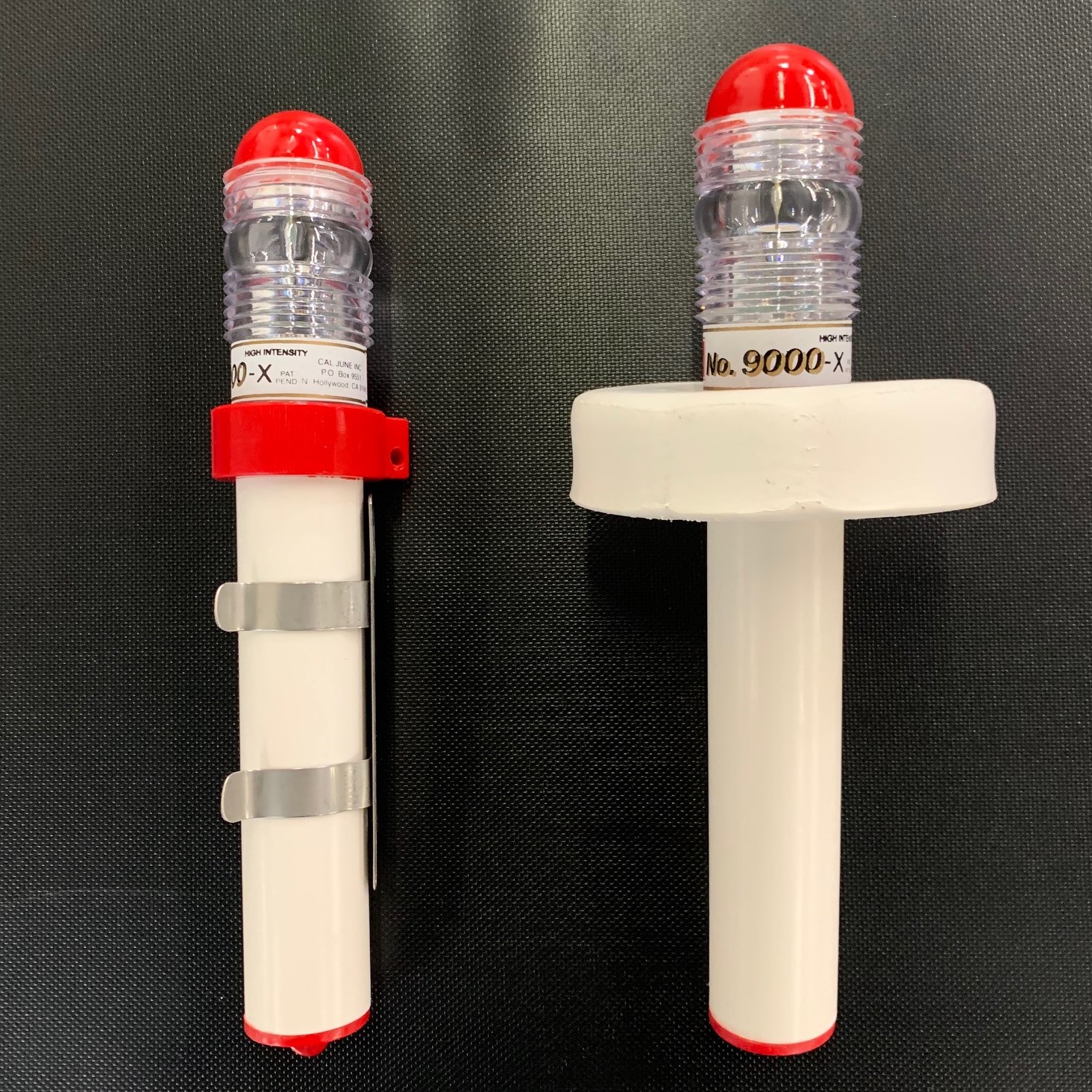 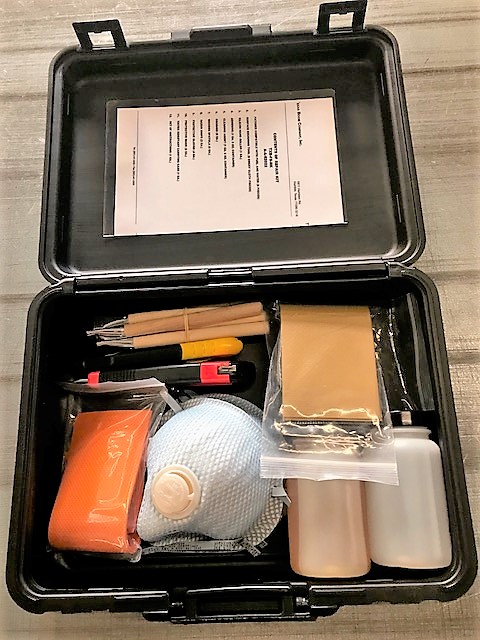 Containment Boom Reels - Boom reels are large spools that allow oil spill containment boom to be stored by winding the boom around the spindle of the reel.  Boom reels can be mounted on trailers, boats, or movable pallets.  When needed, the containment boom can be unwound, allowing for easy removal and deployment.  The reels can be manually operated or powered by motors to reduce the effort required to wind and unwind the boom onto the reels. 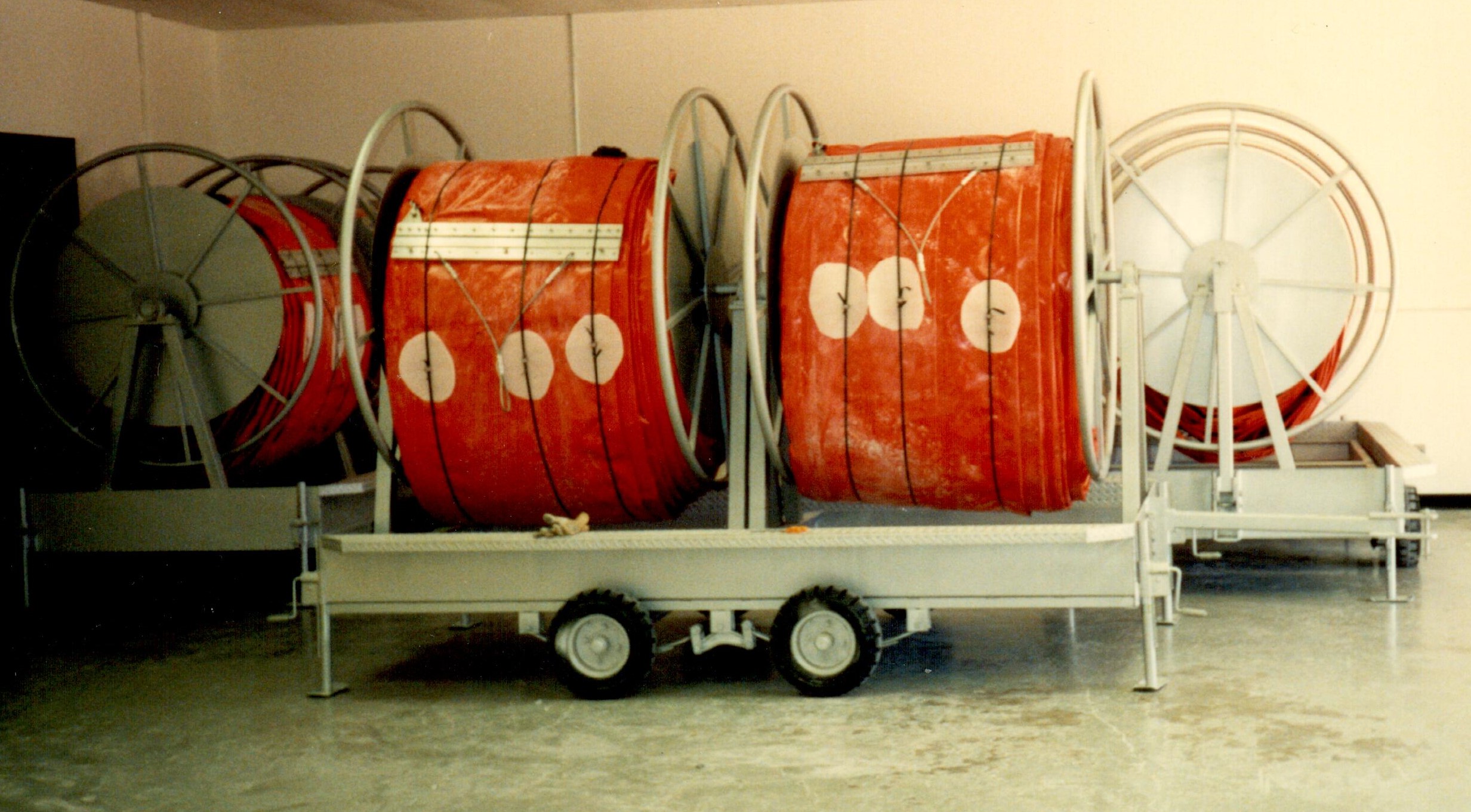 Texas Boom Company's knowledgeable staff is always happy to provide guidance on product selection, installation instructions, customization, and any other facet of your project.  Feel free to call 844-444-8144 any time.