One of the first actions taken when oil has spilled into or in the vicinity of a body of water is to encircle the spill with containment boom.  Because oil and other hydrocarbons don’t mix, the oil typically stays on the surface of the water in a slick.  Since the oil floats, a barrier at the surface of the water can be effective in capturing the oil until it can be addressed.  That's where oil spill containment boom comes into play.

Absorbent boom, or sorbent boom as it often called, are mesh filled tubes that perform as they are named – by absorb the oil.  The synthetic fibers that are used to pack the mesh tubes absorb the oil without absorbing the water.  Based on this unique attribute, the absorbent boom is buoyant and floats without the need for additional floatation.  Typically a clip and a ring is attached at each end of the sorbent boom, allowing the sections to be quickly attached end to end,. These type sorbent booms are deployed in long strings, with each section overlapping by a foot to eliminate any gap.  Once the sorbent oil boom is saturated, it must be removed and disposed of properly. 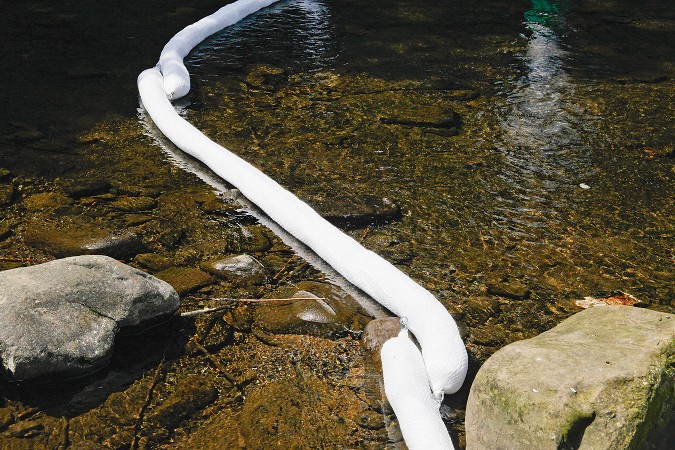 Conventional containment boom is constructed to form a barrier at the water’s surface and keep it from spreading until it can be removed.  This type containment boom is constructed with a combination of a freeboard and skirt.  The freeboard is the portion of the boom that floats above the water and provides the boom with flotation.  The flotation is typically provided by either an air filled chamber, or a foam filled chamber.  Either freeboard option is made with a watertight chamber to create and maintain the floatation of the containment boom.  The portion of the containment boom that hangs below the surface is referred to as the skirt or draft.  This component of the boom is designed to keep the oil from traveling under the boom.  Depending on the water and weather conditions, both component are sized appropriately to provide maximum containment while being efficient with costs.  Containment boom typically ranges from 10 inch to 60 inch total height (combination of freeboard and draft heights).  Various colors can be used, but typically containment boom is either bright orange or yellow – providing better visibility to boat operators. 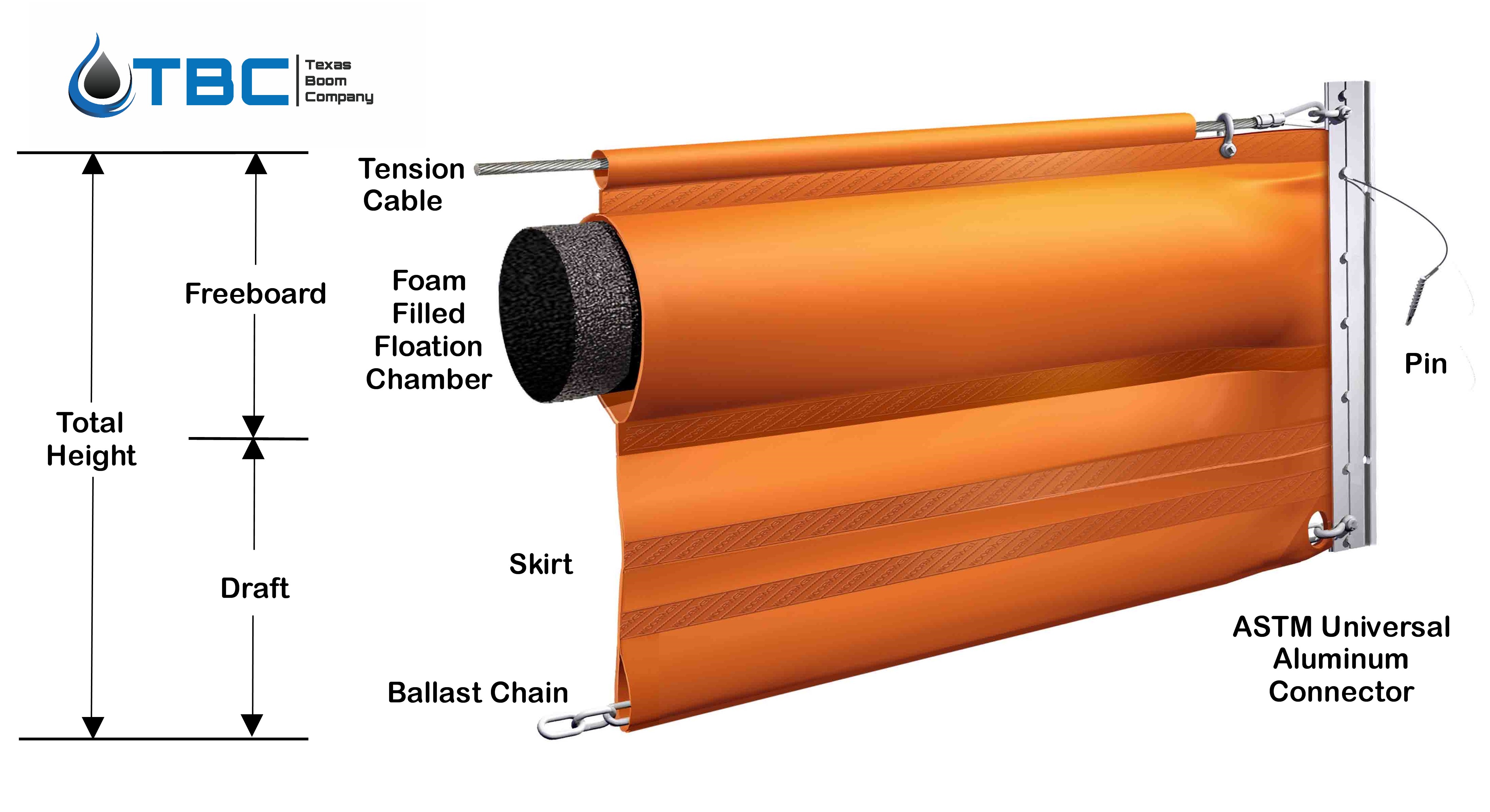 Texas Boom utilizes RF welds to bond the different layers of fabric to build its containment boom.  These RF welds are shown to provide a stronger bond that heat seals used by other manufacturers.  The fabrics used contain UV inhibitors that help with the durability of the fabric under long term exposure to the sun and elements.  The ASTM universal aluminum connectors are made to hold up to saltwater exposure.  Since most manufacturers utilize these same universal connectors, containment boom sourced from different companies can be used in combination with no problem for the responders who are deploying the boom.  Toggle pins attached to cables provide a ready means to lock the connector bars together as the containment boom sections are deployed end to end.  Galvanized chains are used in the bottom of the containment boom to provide ballast as well as strength to the sections of boom.  The ballast serves to keep the boom in a vertical position, maximizing the effectiveness of containing the oil.

Containment boom is typically either moored to a fixed point on the shore (such as a pier, piling, or stake) or secured with anchor kits deployed at intervals along the length of the boom.   It is important for the containment boom to be secured in position to avoid potential breaches of the boom. 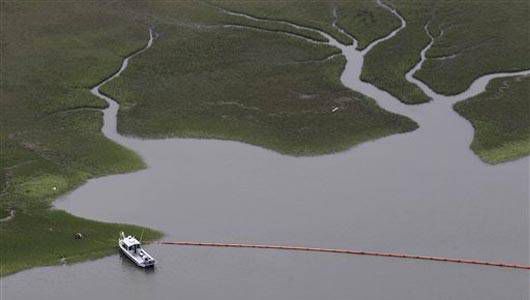 Oil spills can be contained using boom in a wide range of water ranging from small stream, drainage ponds, rivers, lakes, bays, and even offshore in deep water.  As larger waves and greater winds are expected, the size of the containment boom should be increased accordingly.  Containment boom is not expected to be 100% effective in containing oil spills.  Should the boom become displaced, it won’t do its job.  In addition, large waves and strong winds can push oil over or under the boom, depending on conditions.  Though not full proof, oil containment boom is a proven first line of defense to protect the environment in the event of an emergency.  Texas Boom Company is proud to provide these important products.

We encourage you to contact Texas Boom Company if you need any additional information or expert advice on the products best suited for your needs.